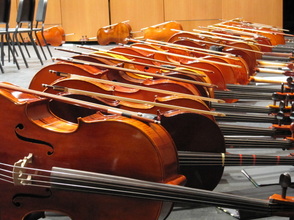 The Redwood music department oversees instrumental music from grades 4-8, as well as the choir and color guard/dance program for grades 6-8.
Interested in seeing the various ensemble trajectories of each part of our program? Click on the image below to learn more! 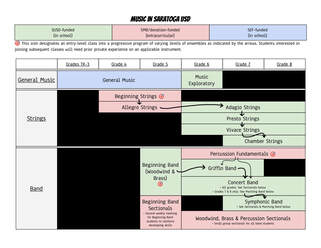 (click to view)
The success of any music program does not happen without your generosity and support. Please head here to find the Saratoga Music Boosters SUSD Music Program Contribution Page.

Saratoga Music Boosters (SMB) funds support two elementary school instrumental programs: string orchestra and beginning band.  Students who have class in the morning before school are taken to their respective schools by bus before regular class begins.  All groups perform annually at Fall & Spring district concerts as well as at SMB’s Pancake Breakfast in May.

Students may start on one of four string orchestra instruments: violin, viola, cello, and string bass. Elementary strings is a part of our "Instrumental Music Exploratory" track in 5th grade music offerings.

Students may play in the SUSD Beginning Band program.  Students may choose to start on one of the "big four" instruments: euphonium/baritone, trumpet, clarinet, and flute. These establish important playing habits for students to successfully transition to a second instrument for their second year of instrument study if they so choose. 5th Grade Band is a part of our "Instrumental Music Exploratory" track in 5th grade music offerings.

All Redwood students in the 6th grade are given a year of 6-week exploratory blocks in which they are introduced to small segments of possible electives that they may choose in 7th and 8th grades.  Music exploratory includes topics on basic music notation and reading, percussion rudiments, music in film, color guard basics, music as a communicative and artistic medium and more.

For the intermediate instrumentalist with primary instruction on a woodwind, brass, or percussion instrument. Instrumental techniques and musical practices are advanced in class and during monthly in-school sectionals. Intermediate band concert performances (outside of the normal school day) occur toward the end of each semester.

For students with significant experience on a woodwind, brass or percussion instrument. Open to 7th and 8th graders as an elective choice. Strong 6th grader musicians who are interested in taking band as their in-school elective in place of the exploratory wheel may also audition for placement into Band 7. During years that it is offered, Symphonic Band is our most advanced, audition-only ensemble. Both bands perform multiple times throughout the school year. Marching band season occurs at the beginning of the fall and continues directly into a concert and chamber music focus for the remainder of the school year. Class meets daily during school.

The Redwood marching band is made up of all 7th and 8th grade band students and all color guard students (some of which also serve as the I.D. unit).  Marching Band season runs approximately from September until the beginning of December, with one additional possible marching band performance in the Spring. Registration helps cover the costs of instructors, supplies, competition fees and transportation.

Redwood band students further develop their skills in instrument-specific sectionals under the instruction of an instrumental specialist and refine music and concepts currently being worked on in band.  Registration helps cover the costs of teachers and classroom supplies.

For students brand new to music interested in playing concert band (and eventually marching) percussion, or for students with some musical experience on other instruments who are interested in learning the fundamentals of concert percussion as well. Contribution helps cover instruction and classroom supplies.

Includes all current band students who have had at least one year of concert percussion experience. Advanced Percussion Ensemble further develops skills, knowledge and musicianship learned in concert band and the Percussion Fundamentals class. This group performs at marching competitions as well as at district concerts. Contribution helps cover instruction and classroom supplies.

Music students in the 7th and 8th grade who are also in another primary performing ensemble such as band or orchestra may audition for a chance to be in the Redwood Jazz Band.  Students are given the opportunity to learn techniques and styles of instrumental jazz playing, including improvisation on their own instruments. Contribution helps cover instruction, uniforms, and classroom supplies. *Please see the jazz band flier for more information.

Redwood string students audition to be placed in one of four string groups. Students in Adagio are given the opportunity to refine playing techniques, enhance musicianship, and play in a group with their peers. The Adagio String Orchestra participates in various events and performs at district concerts annually.

Redwood string students audition to be placed in one of four string groups. Students in Presto are given the opportunity to further develop playing techniques, enhance musicianship, and play in a group with their peers. The Presto String Orchestra participates in various events and performs at district concerts annually.

The Vivace Strings is an advanced ensemble of auditioned students who rehearse continuously challenging music to develop independence and musical leadership. The Vivace String Orchestra participates in various events and performs at district concerts annually.

The Chamber Strings is our most advanced orchestra ensemble, made of auditioned students who rehearse high school-level orchestral and chamber music to enhance independence and musical leadership. The Chamber Strings participates in various events and performs at district concerts annually.

For any student who loves to sing! Choir performs various times throughout the semester at concerts as well as in competition.  Class meets after school as well as other specified times for performances.